So, wow. What a flippin’ weekend guys!

It’s mid week and I still feel like I could dominate the world (perhaps today is the day, mwuhaha). But in all seriousness, Sunday was literally the highlight of the past few years in this fitness/training biz for me, hands down.

Before I get into the actual powerlifting meet part, I figured it was the perfect time to just mention the last few days while I’m at it! Friday night was the Canberra Night Markets and my beautiful sponsors, Runaway Apparel, had a stall there for the duration of the event. Can I just say (going to say it anyways), these girls are insanely awesome. I have known them for the past few years through netball but never saw this side of them, and I couldn’t be prouder to play a part in this team. I’ve asked them to do an interview for the bloggie so you guys can get to know them as well which will be coming up in the next few weeks. For the mean time, go and check the stuff out and if you’re a fellow Canberran, pop in the code CBRFREEDELIVERY and shipping is free – I may even hand deliver it if I like you, win win, right? 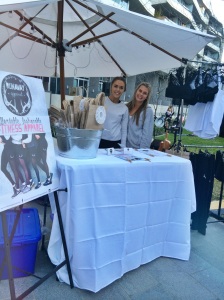 Now, to the meet. What a flippin’ experience.

So I started the day with weigh in’s and unluckily for me (warning male humans: what up boys, welcome to the female human body), my time of the month just happened to come two days before. Now I have never, ever, ever weighed myself in this time period and holy shit, mind blown. I literally put on 2kgs in 1.5 days (females is this super normal for anyone else?) #bloatisreal. Since I could do a sweet total of fuck all, I just had to roll with it, and did. So this chubby cheeked chick weighed in at 59kgs, heaviest I’ve ever been and funnily enough, it was the least amount of stress I’ve ever felt after stepping off the scale. After that I had some coffee, went home and ate some breakfast, updated the Snapchat world on my devil eye (apparently my eye goes red when I have too much sleep) and then headed back out around 9:30am.

I was in the first flight so after chit chatting to just about all of the other female novice competitors (ya’ll so bomb if you read this), we began to warm up for the first lift at 11. My squat numbers originally were 100kgs, 112.5kgs and then 120kgs, all of which I had hit before. I did 110 and it felt super easy so for the second attempt we increased it to 117.5 – which also moved relatively fast.  Since it looked/felt good,  I increased my third lift (with the help of Sherro), to 125kgs – an all time PB. Happy to say, SMASHED IT, BITCHES.

So, uh, bench… Lol… K. I need a whole lot of work with my calls. I won’t go into it but I ended up with 62.5kgs on my third attempt just so my total would count… which is 10kgs under my current PB. Oh, Beyonschae, you did dat dere special form.

And lastly, you guys have probably seen the never ending photos/videos of my deadlifts, but sweet mother of mary jesus it was the best they have ever felt for me. Opener was 137.5kgs and it actually flew up too fast and I wobbled at the top, nearing calling for a red light. 2nd attempt was 147.5 – nailed it. And lastly, 155kgs was next up, the one number I had been nervous about hitting coming into the meet. Demolished. #stoked #fistbumpingmyselfstill

With those numbers, I ended up coming away with the top female lifter for the day which is pretty damn cool. I definitely didn’t go into it to ‘win’ but it was a super awesome feeling regardless!

I can’t even begin to explain my feelings at the end of the day. I went from bodybuilding straight into powerlifting and once I look back at the last 10 weeks, it couldn’t have been an easier transition. Right from the beginning powerlifting felt right to me and the weekend just confirmed that even more. What made it even more awesome is that some of the greatest people I know came out to support me and I can’t thank you guys enough. My heart was exploding from not just the caffeine I consumed, but alllllllll of the love I felt from every scream that came from the crowd (Lyndsay Saywell, hello, love you, I would hate to be the person next to you though or any surrounding eardrum).

A giant thank you to the team at PTC. You guys made everyone feel so welcome and the day ran SO smoothly. Sherro, the fact that you were there to just tell me to lift the damn weight meant the world! Such a cool environment to be apart of and highly recommend heading out there if powerlifting is something you want to try.

And finally, to the dude who gets to receive my super excited texts at 3am and my check in emails whinging about how my body is beat, thank you Ryan Doris! Your programming/peaking turned me into a smaller, more compact, less hot version of Wonderwoman on the day. Which I totally rocked, K.

Ended the day with cuddles from my favourite (favourite meaning only one I technically like right now, or ever) mini human.

So, that’s it for my powerlifting stint, back to bodybuilding…

See you on the platform, amigos,